Since several tropical depressions came and dumped tons of rain here in sunny Florida we are having a horrible mosquito problem. I am sure it is not a problem for the frogs, birds and anything else that eats mosquito’s but it is a problem for moi.

In general, any mosquito within a 10 mile radius of me will come to drink some of my sweet nectar.
Apparently something in my blood makes them want me. I don’t know what it could be…..all the salad I eat? The wine I drink?
Who knows, but I am not safe lately.

They hover around the doors waiting for me.

Someone told me that the county is going to start “spraying” for mosquito’s.

That would be ok, and it made me think of something that we used to do as kids.

A mosquito truck would slowly drive through our neighborhood on occasion and spray pesticides out the back of the truck. 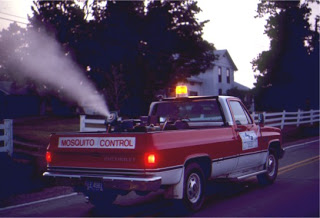 All the neighborhood kids would run outside and follow the truck.

This is what kids did when they did not have computers or phones. (or a brain apparently)

Yes, we would run through the fog, directly inhaling DDT. I can still smell it.
You would have thought we were chasing the Ice Cream truck.

Smart right? This could be the reason why I never grew past 5’2?
Or possibly the fact that I can only retain basic math skills?

Where was my Mother?

A few years later I remember breaking open a thermometer and playing with the mercury.

I have no idea how I learned that this would be interesting…perhaps in science class.
I am lucky I did not grow a 3rd arm.
Anyone else play with dangerous toxins as a kid and live to tell the tale?

12 thoughts on “Insects, insecticides, and a bit of mercury.”