I have been battling a rabid and menacing squirrel.  And when I say battling, I mean I have been tapping the window getting him to leave the new bird feeder alone. Which he does for 3 seconds, cause I am all scary and stuff.  Cocoa is perplexed by this guy also. Last week all she wanted to have was a bird. Now, she has moved on to the squirrel.

Here are some funny pics from when she was trying to get  a bird. She chased it from the feeder up to one of these palm trees. She was standing at the tree and crying. It was too cute. Then she caught sight of the bird….well she THOUGHT she did. These pics are with my old camera btw:   (and Ozzie is not dead, he is just rolling in the grass, he is a professional roller)

That is a fake woodpecker. Which just confuses the heck out of the reaI ones. I know that it conflicts with my fake flamingo, but I am crazy like that.

Cocoa still thinks it is real. And she still wants IT!

So, later on I was outside after Cocoa chased the squirrel up the tree.

I was looking up and going to take a picture when the crazy rabid menacing cute squirrel jumped from one tree to the next. I thought for sure it was coming right at me and this is the picture I got, as I imagined him planting himself on my face and eating me…I could already see the 5 o’clock news feed: ‘Woman has face eaten off by rabid squirrel as her boxers JUST watch!’ 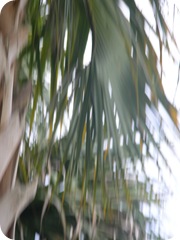 I have great skills right?   This is the reason National Geographic never will keeps calling me.

Ok, here is the vermin. I shall name him Ralph. He eats like a pig and makes a huge mess.

Do squirrels ever eat humans?  I think Ralph my have it in him…not sure, but he looks like trouble, just look at that fluffy thorny tail and sweet horn like ears.

I googled squirrel and was shocked, I mean SHOCKED to find this page: squirrel recipes. Seriously…..this is a few of them:

(please don’t click the links, ‘cause then I will be worried you are making squirrel for dinner, and I won’t be able to speak with you. ever again.)

After reading some of the recipe titles I had a flashback of the movie Forrest Gump: ‘Fried shrimp, boiled shrimp, baked shrimp, shrimp kabobs……” Good ol’  Bubba Blue.

Don’t you wonder just how many squirrels it would take to fill up a crock pot?

I went to the garden center and bought Ralph some corn cobs. I put a few out and he took them away to his cave and dined on them.

I think this may work for our situation…he has not been messing with the feeders since….I just hope he does NOT post my address on his blog for all the other squirrels. The corn cobs can get pricey!

28 thoughts on “It is almost like living in the jungle…..”