Skip to content
July 8, 2011 Busy Bee Suz
When I posted the photo the other day of the antlers Chi-Town & Jenn thought is was a bad thing…..like someone hurt the deer the antlers belonged to. 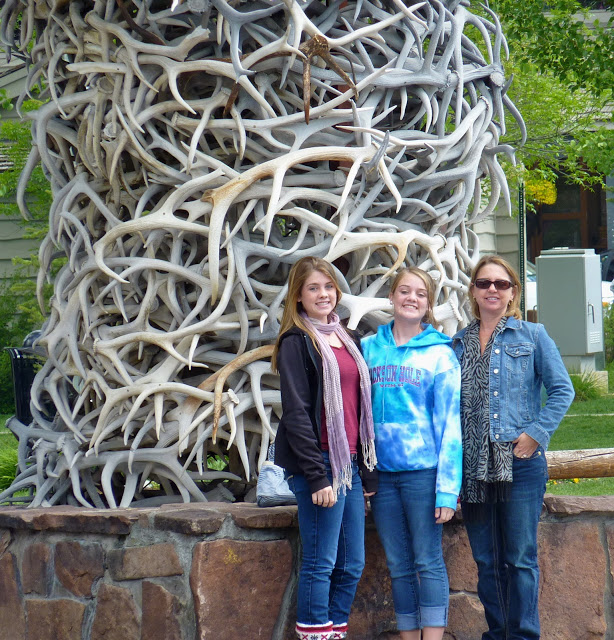 Not the case at all. We learned that Elk shed their antlers each year. (And moose too!)
In Jackson hole, the boy scouts are allowed to collect all the shed antlers from the Elk Refuge and then they are auctioned off to all sorts of folks. (Who doesn’t want an antler chandelier or candle holder? I want one for my future dream mountain house!!!!)
The boy scouts keep 20% of the $$ and the rest goes back to the Elk refuge.
In the town center of Jackson Hole there are four of these antler arches.

Cool no?
All I can think of is, the Girl Scouts must be p*ssed that they did not get this sweet antler collecting deal. $$$  Surely they would have given up that whole cookie selling gig for this.

We found the coolest store/gallery in Jackson hole. It was more of a gallery, cause we could not afford anything that we liked. They had the jaw from a wooly mammoth. A real jaw. (It was found in the peace river in Florida…well, if I ever stumble upon one of those….) This place was just chalk (chuck? Chaulk?) full of old things…fossils, dinosaur skulls, eggs and you know, stuff you don’t find at super wal-mart;
Small and GINORMOUS geodes. Inside they are filled with crystals and magical powers.
Ok, not so much on the magical powers…but I had you going right?
In this sweet store/gallery, you can choose your own geode and then they help you OPEN them up. Seriously…I was not falling for this gypsy hob nob…but someone else was. And he was holding the wallet and looking into the four blue eyes of his offspring.

Linds: Crank crank CRACK! Voilia.
Now, it was Lolo’s turn. I don’t know who came up with this whole crank system..it involved a bike chain, a plastic bag and an old steering wheel. Sounds like a MacGuyver operation to me….But it worked. It cracked the geode ball right in half.

Here is what came out of Lolo’s chosen geode.
Hello? it is a heart filled with amethyst. 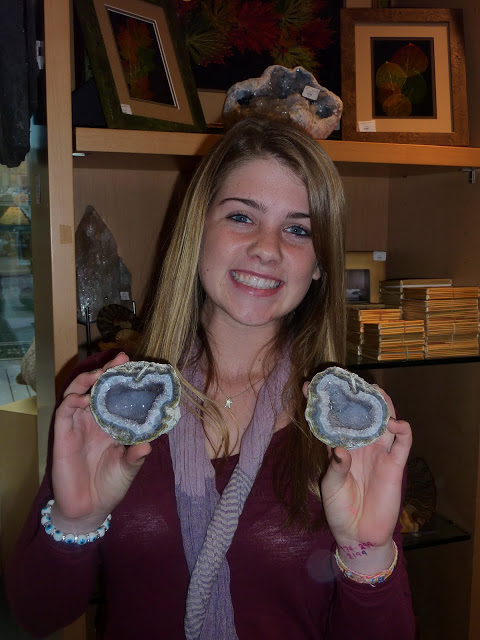 And now, a larger geode is growing out of her head…can’t wait to see the bill for that one.
And Lindsay’s was quite the find. I don’t remember the details of WHY it was so wonderful but the ‘guy’ said one similar to this was sold recently for $200 bucks. Of course when she heard this she was ready sell…even before she ‘paid’ for this one. And by paid, you know I mean the Coach paid.


Since this post was full of educational stuff (I apologize for that, I hate it when I learn unintentionally too) I feel the need to add in this one funny photo.
While in the Jackson hole visitors center, Linds grabbed this hand puppet and said  to me: (her sweet and demure mother)

“I will get you with my BEAR hands.”


yeah. I don’t know where she learns these things…
Have a beautiful weekend. THAT is an order. 🙂

Animals As blogged by Suz A to Z Mondays Blonde moments Butterflies Confessions Costa Rica Doing good Family Friends Funny Gardening Grandma Health Holidays Home stuff In the kitchen Kids Marriage Memory lane Monarchs Music My mom Bev Neurotic. Me? New Zealand On Blogging Pan-freaking-demic Quotes Random Renovation Save the planet Say what? Stuff that keeps me up at night Suz as a kid Swallowtails Tagged and I'm it. TGIF Things I have learned This that and the other thing Travel Vlog Willy Nilly Wordless Wednesday