And that was the phrase to change our day.


As we were driving AWAY from out hotel at Teton Village the Coach nonchalantly pointed to the right and said: That is Idaho, just over that mountain there.


Oh…” I always wanted to visit Idaho” would come back to bite me in the butt.
And we were on our way to the lil’ airport.  The lil’ windy airport.


Harrowing:
Extremely painful; causing physical or psychological pain.
I would never throw that word around. But this would prove to be a harrowing day. 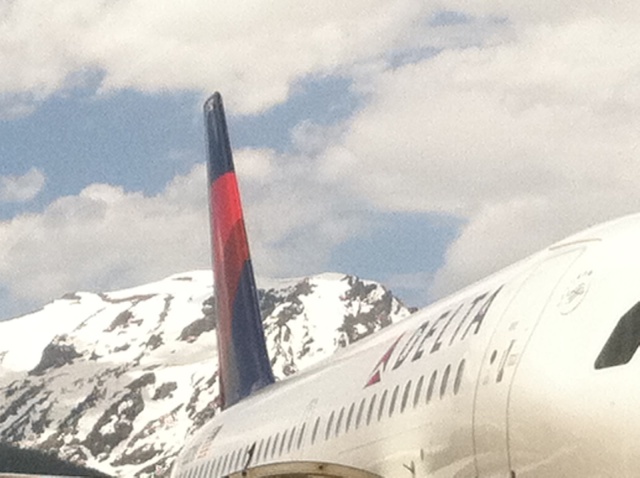 Our  plane on the ground in Jackson.

As we were boarding our flight from Jackson Hole to Salt Lake City (later to connect to Las Vegas) we noticed the HIGH winds. This set my alert radar on HIGH.  With my alert radar already set to medium high….this MIGHT be an issue.


But the winds in Jackson hole would not be our issue….our issue would be the wind shears/Storms in Salt Lake city.


In reality, our plane should NOT have taken off with that destination. IT was supposed to be a short flight, 1 hour at the most. The pilot warned us upon take off that it would be bumpy on departure and upon arrival. I had no idea…that the TWO meant the SAME. LIKE: NOT UNBUMBPY at all.


Have you ever flown in wind shears? How about Micro-bursts?


The Coach has flown in both…many many times. Did I tell you that he worked in the airline industry for many years? He has flown all over the world in all sorts of planes. Lil’ planes. Big planes. He could be flown across the world to work on an engine…fix the engine and then have to FLY in that same plane.
He knows good and bad…
This flight from Jackson to SLC was beyond BAD.


I only had one armrest to clench too…my seat mate to my left had the armrest flipped up when I sat down and I just ignored it.
The flight attendants never even got up from their jump seats..there would be no drinks or peanuts on this flight. Way too much wind. Way too many bumps. Up and down. Side to side. Up and down.


As the pilot was trying to make his descent into SLC it got much much worse. The up and down became BIGGER ups and downs.


At once it seemed like the plane just dropped…from the corner of my eye, I saw LoLo fly up out of her seat for what seemed to me at least 2 feet. (coach was across the isle from me, then Linds, then Lo was by the window)


At this ‘fall’ the pilot hit the peddle to the metal to get us out of this trouble.


This, I would find out later was a micro-burst.


And I knew then and there, we would not be landing anytime soon.
I again, for the 100th time tightened my seat belt. For sure, my hips would break in half before I fly out of this seat.


I did my best to breathe…meditate….pray…eyes closed, both hands clenching my one armrest…I tried to take myself away from this plane…away from this hell. But it was hard.


Several people all around me were crying hysterically. And the barfing began…bags were being opened all over the plane; people coughing(purging) into them.


I peeked open my eyes for a moment to check on the girls…they were huddled together covering their faces with Lindsay’s sweatshirt. The coach, well, he did not look good, sweating, pale.  And that solidified my thought: This is BAD.


A few minutes later the pilot let us know that we were in a holding pattern, waiting for the weather to clear in SLC.
I thought: “there is no way this is going to clear up soon”


I continued with my breathing…meditating, trying to block out the criers and vomitters.  Lucky for me, I am not a big vommiter…I am more likely to shat myself than give up my groceries. Lucky that did not happen.


I was thinking about my Grandma and her always telling me how much she loved to fly.


I don’t know how much time passed while we circled SLC…maybe 15 minutes…but it never was smooth…still bumping up and down, side to side. We were all waiting for another big DROP like before.


Finally the pilot said we were going to land in Idaho and refuel…then try to fly back into SLC.


I was thinking, please, lord let me off this plane.


We landed. It was over. We were on the ground. I looked at the Coach and the girls…we survived. I made a motion with my hands holding a steering wheel referencing ‘driving’.


Coach said to me: “I need to get off this plane.”
I thought: there is no way they will let us off…they just don’t do that.


He got up and headed to the front immediately. I moved over to sit by the girls and make sure they were ok.


They were better than I expected. But once on the ground, I did feel better already. My heart stopped pounding so hard…my hands were so sore from clenching the armrest. I felt close to normal. (for me)


All the crying people were up and moving…looking terrified; shocked.


I told the girls, “they won’t let us off…they are not allowed to.”


I was also thinking…I am in Idaho. I really don’t even know WHERE Idaho is compared to where we were going.  I forgot my globe at home.


This is getting really long.
Can you guess how it ended?
Obviously we lived…
Do you want to throw me off a plane after reading such a long post?

25 thoughts on ““I always wanted to visit Idaho.””