Well, not really, but it makes for good TV.

I might have mentioned before that Lolo has played softball since she was 5….and the Coach has coached that long as well.  She started travel ball at age 9 and soon after we started collecting trophies.
NOT just for her, but for the team.  But, let’s face it, she is amazing and earned her share of shiny stuff.
I’ve been known to take one for the team, but this is ridiculous.

For the past few years I was perplexed as what to do with them all. The Coach felt the same way. Lolo had no attachment to them whatsoever….except for the glass/crystal world series trophy, which resides in Coach’s work office.

I searched and searched for a good way to recycle/reuse them. ANYTHING aside from sending them all to the landfill….I would not be able to sleep if I did that. Fo’rizzle my shizzle. 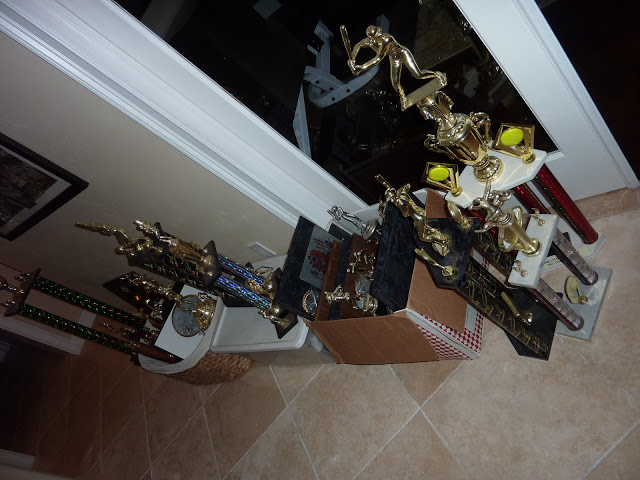 I did a search again this week and each and every outlet I found that would reuse them was shut down.
My heart sunk each time I hit a dead end.
I imagined my retirement; me, old decrepit and tripping over trophies. Yeah, I was 55 in this scenario. 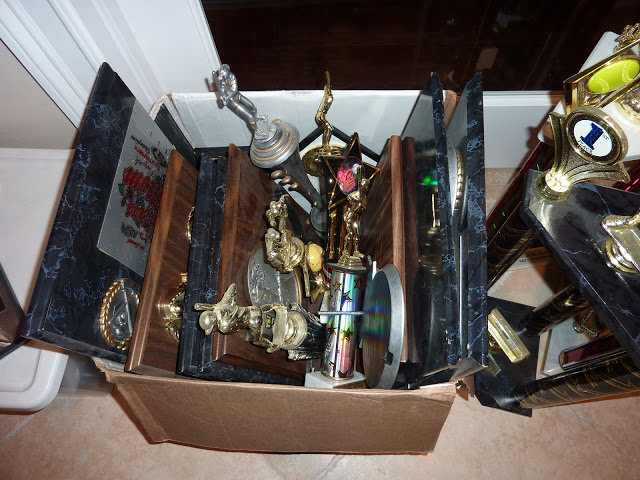 Then I read something about putting them on craigslist.
I’ve shied away from craigslist….because of that killer and all.

But I thought: what the heck. A killer VS a landfill? I will take my chances because I love my planet.
Do you feel bad now since you threw away a plastic bottle?
Well you should.
Do you see the extent of what I will do to avoid the landfill…and you just willy nilly threw away plastic?
DID you even think about all the oil it took to MAKE that bottle?
Maybe we should all just pack up and move to the Middle East.
Oh…wait…I forgot I was writing a post here.
I posted FREE TROPIES on crags list.
I got 5 replies. The very first one was for a not for profit group that will make new name plates and reuse them all.
BINGO!
MY DAY WAS MADE!
Even better, the Coach met the non-craigslist killer at work with the loot!
Just goes to show you, we can all keep our landfills to a minimum. I mean it people.
Don’t make me come over there…..
You’ve not seen the ugly side of me. Ok, maybe you have.
Hopefully you love me just the same.
XOXO