Skip to content
So, besides visiting the Circus museum and getting pregnant we toured the home of John and Mable Ringling as well as his art Museum.
Aside from being a circus creating genius, John also had a passion for art. Not just collecting it, he really studied it SO he could collect it properly.
Make sense? Hell, I don’t usually.

Their home, the circus museum and the art museum reside on 66 acres…directly on the water.

We were only able to see a portion of the lower level inside. Can you believe they let other people in besides us? We were not cool with that; too crowded.
The Chandelier was from the original Waldorf Astoria in NYC…..it’s so similar to the one over my kitchen table. 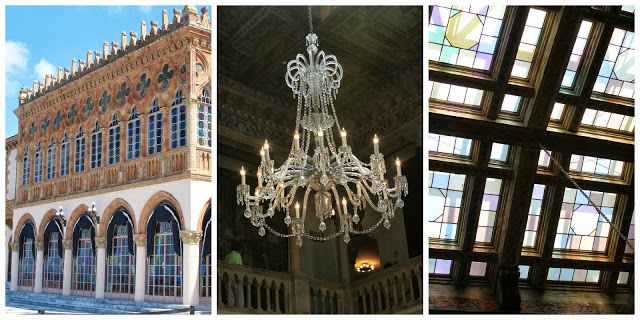 As we walked out on their back porch we noticed the intricate tiling.
Yeah, I just called this a back porch!

The Coach looked down at the stone and pointed out each color for me as well as what they were:  Granite, marble, & onyx oh my.

He might have said something important to me as well, but I was distracted.

I was admiring the architecture, the scenery, the flooring while trying to listen to him and then I saw a little turtle bobbing in the water.

Guess what I shouted when I saw the cute turtle?!

What else would I have said??