The Coach and I were B & B virgins prior to his surprise birthday trip.
I booked our rooms at The Beaufort House B & B.

This was a great place for us to lose our B & B virginity….
It didn’t even hurt!
That was our room up there. Don and Kelly were right next door~~
Here is Kelly posing for me outside her door.

Our rooms were not INSIDE the main house. Actually, we were in the basement if you want to know the truth.  But if you are staying in a B & B and they put you in the basement, they refer to it as “terrace” rooms. Ok, it wasn’t a basement, but I love to play the pity card.
This is a view of our rooms from the outside….you can see that Don is in there laying on MY bed.  He and the Coach were watching some sort of auto auction, plotting on what to buy next.

Our rooms were quite nice. Although, I would warn anyone older than me…Or even ME to avoid these rooms next time because the bathtub/shower combo was dangerous.
It was hard to climb in and out, and I consider myself to be fairly agile; I can still do a cartwheel/roundoff as well as walk a straight line while bossing people around.
Yes, I’m bragging.
Can you believe I took a photo of the bathroom with the toilet seat UP? Me neither.
We did have a cute little fireplace in there too; quaint and warm.

BUT the step next to the {again} Open toilet makes for a good squatting spot to open some wine.
Yeah, we are classy like that! 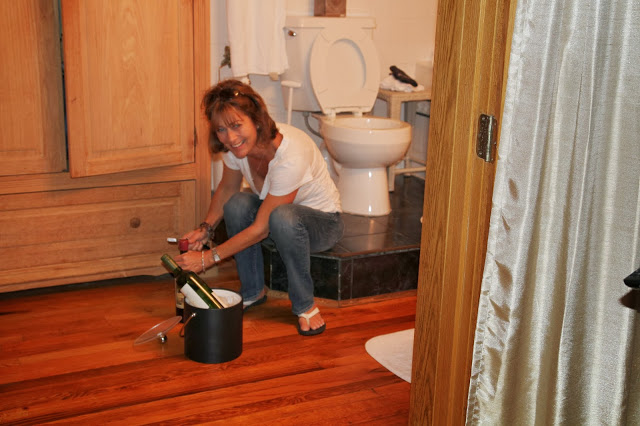 The breakfasts were divine. The hosts of the house were fabulous; Chris and Jim plus one employee {Erin} running it all. (11 rooms)
By the end of it the Coach, Don and Jim were the best of friends. They bonded over micro-brewed beer. You know how men are….

One evening while we were heading out for dinner I spotted some eyes peeking at me from one of the cottages behind our ‘terrace’ rooms.

Erin lives back here with Merry and Clive. Aren’t they so cute? She told me it must have been their dinner time when I captured this; hoping I was going to feed them.

So, do you B & B when you travel?
I  guarantee we will do it again. We’d actually stay here again if we get back to Asheville.
The rooms in the main part of the house are just awesome too….with clawfoot tubs.
I’m going to start planning my next get away as soon as I’m unpacked from this one.