Skip to content
Did you even notice I was gone?
Pffffft.
Joining Tanya and friends-Sharing 5 willy nilly thoughts, pics or whatevers.
*We’ve had very limited internet for the last few weeks. Talk about being annoyed. I know…I know….it’s not as though we didn’t have running water or electricity. What can I say; we are spoiled. I’m also a fan of air-conditioning and that roof over my head.
*The Coach, Lolo and I watched the documentary To Be Takai the other night; very interesting and cute. George Takai is very funny and has a rich history other than being a part of Star Trek.
*I had this vanda orchid on my lanai and when it stopped blooming I put it out in the oak tree to pasture.  Last week I noticed how happy it loved it’s new location.  Prepare to swoon.

*Swooning is fun isn’t it?
*Someone is suffering with senility. No, it’s not me. yet. It’s our sweet Ozzie.
We noticed about six months ago that he was losing his marbles.  The vet agreed with me and said it’s part of the aging process. He sleeps a lot. He gets lost in the house. He can’t hear us. He hears things that aren’t there. He stares at walls UP CLOSE.
However, he still has moments of pure joy. I took him out to see the Vanda orchid and he was all sorts of cra-cra; running around, doing flips, rolling in the grass. 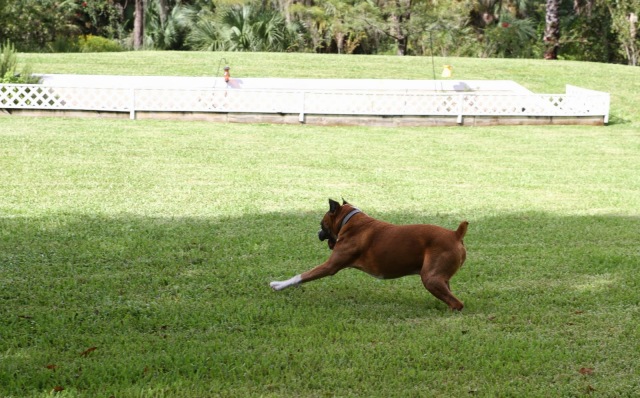 Apparently this embarrassed Cocoa….she stayed on the sun deck and wouldn’t even look at him. Girls.
Wishing you all a wonderful weekend filled with pure joy, swooning and hey, get cra-cra and roll in the grass!
XOXO