If Cat’s have nine lives, Ozzie has about 13.
He’s recovered from his eye surgery just fine. We went in for a recheck on Christmas eve morning and all was good. The ophthalmologist hooked us up with an appointment to an oncologist to see what we can do {easily and without chemo} to help control the possibly spreading cancer that was detected in his third eyelid.
Moving on…..right?
Well Christmas morning he was all out of sorts.
Anxious. Out of it. Could not rest/lay down. No appetite.
The Coach and I figured this was his last day.
The day after Christmas he was just sleeping for the most part. No appetite.
Out of the blue my regular vets office called me. It was the ‘fill-in’ vet checking in on Ozzie. Apparently he’d just received the pathology report from the ophthalmologist.
{Ozzie’s regular vet was away on vacation}
I told him how he was behaving and he said to bring him in that day.
The fill-in vet told us after listening to his heart that he thought Ozzie was having major heart problems. He sent us directly to the emergency pet cardiologist.
After many tests, the specialist confirmed that Ozzie was in congestive heart failure BUT that we’d got him there soon enough to rectify the issue.
We left him there overnight; they gave him all the necessary meds via an IV.
He’s home. He’s eating. He’s wagging his nub. He’s again taken up residence on the leather sectional.
*sigh* 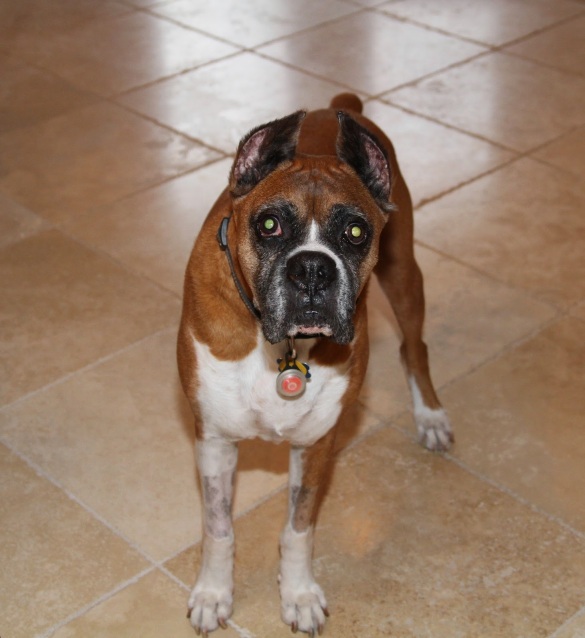 I’m so thankful that the vet called me to ask how he was doing….we were on a “wait and see” mode this time, and in hindsight, that was not going to be a good thing.
Divine intervention?
Karma?
The dog Gods smiling down on Ozzie?
Eventually I’ll share with you how fabulous our Christmas was aside from that little miracle up there.
I hope you’re all happy and healthy wagging your nubs too.
XOXO

15 thoughts on “The Chronicles of Ozzie”