It’s called Butterfly World. Or maybe I should call it Cater-Palooza.

I’m so deep in my monarch butterfly saving that it really has become more time consuming than I’d like, but like most addictions, I don’t know how to stop!

I feel so compelled to help them and at first just planting the butterfly garden filled with lots of milkweed and nectar plants was enough.
But then it wasn’t.
I noticed a LOT of butterfly activity and a LOT of baby caterpillars.
Nature was doing her thing.
And then nature was doing her thing.
And that second nature wasn’t helping the situation.
I have a large amount of wasps and lizards that ALSO like to eat caterpillars.
So, then I was taking in the baby caterpillars and keeping them safely until they were larger and wouldn’t be eaten by the lizards and wasps. But then other things were happening.
Parasites. Disease.
Ugh.
So, now I’m taking in the baby cats and eggs and rearing them until they were full grown butterflies.

And with that, my butterfly population has grown so much that I can hardly keep up with the babies and eggs.

“Oye Vey” as my not so Jewish Mother would say. 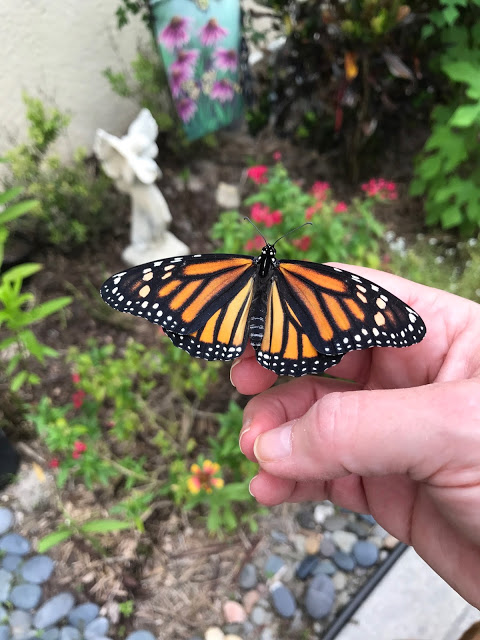 But I’m fortunate that I don’t work full time and I can do this with MY time.
Somedays I release one or two butterfly’s,  some days I release 17.
They are beautiful critters and I think in the caterpillar stage they are so darn cute that I’d like to kiss their little faces.
OF course, I refrain because a smooch from me could be the kiss of death. I’m a rough kisser.

I started writing this post a few weeks ago, and since then, I’m really knee deep in caterpillars. So much so that it’s becoming apparent that I can’t keep up with my production. 🙂

I’ve found that I have so many eggs being laid that I’ve missed and I’m finding that there are SO many outside that are making it to adulthood. So, I’m doing some inside and letting the rest fend for themselves. {Sophie’s choice!}

I sit at my desk and I can see so many of them fluttering by and it makes me so happy!

My name is Suzanne and I’m a monarch addict.

There. I said it!

11 thoughts on “I’ve created my own theme park”