Just prior to leaving for Costa Rica the Coach decided to plan another trip; this one would take place during his (and his BFF’s) birthday.

He texted me and asked if I was open for these particular 5 days and after I checked with my assistant and my assistant’s social assistant, I found out I was free.

Where are we going I asked?

Well, that came out of nowhere.

Turns out we were only flying INTO Belize. We were staying on a small island 30 miles off the coast of Belize.
I suppose that still makes IT Belize, but don’t ask me anything about the country of Belize, because I really only saw the airport (small and nice) and this little island.

We flew into Belize City and from there we took a helicopter to our island.
Yeah, I was totally feeling like James Bond or Cher.

I’m not a fan of flying, but being in a helicopter is so much easier than a plane. So, yes, I’m requesting a helicopter for my next birthday.

Plus, the views were breathtaking. 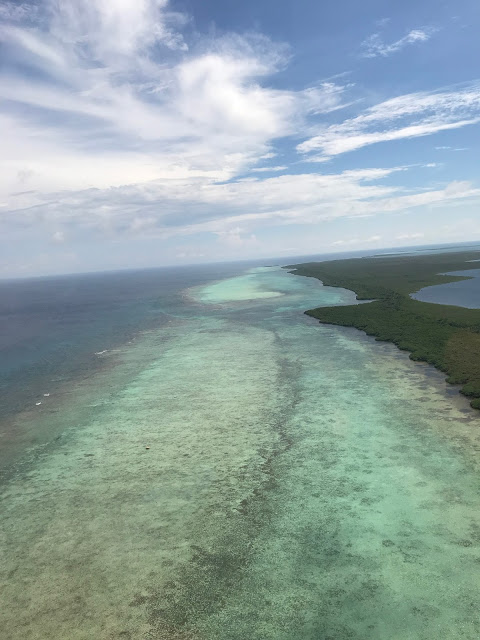 The Belize great barrier reef is second largest coral reef system in the world after the Great Barrier Reef in Australia.
And then you add seeing the Blue Hole  in person.
WOWZA. It’s a large sink hole that is popular with divers; it’s over 400 feet deep and over 1,000 feet in width.

Nope. We did not swim or dive in this area. We did however snorkel all around our little island and saw a lot of beauty.

Don and Kelly with a large starfish. We actually found a lot of these; don’t worry, we only took one out for a pic and he was quickly put back in the sea.

The view from our upper deck.

Our island was really small; actually smaller than our property at home. It held a small home with two bedrooms, two and a half bathrooms, a living area and dining/kitchen.

Kelly and I pretty much stayed on the island aside from one boat trip to another little island bar for a cocktail. The boys ended up going fishing and really enjoyed themselves. 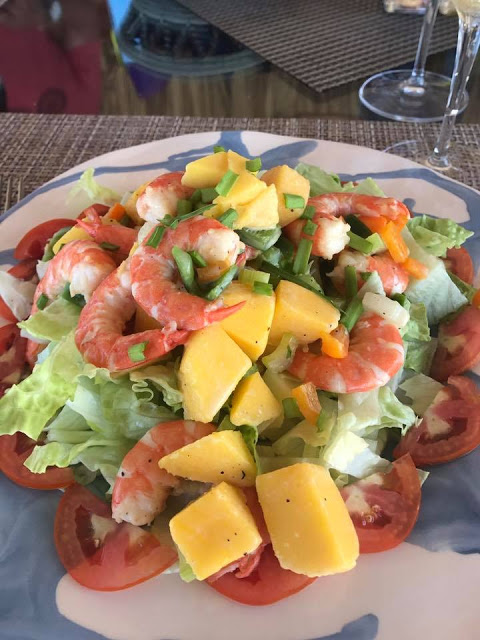 The front yard with a dock and helicopter pad. Not too shabby….Actually, it’s UNBelizable.

One evening we had a rowdy game of Jenga…..the completion was fierce. 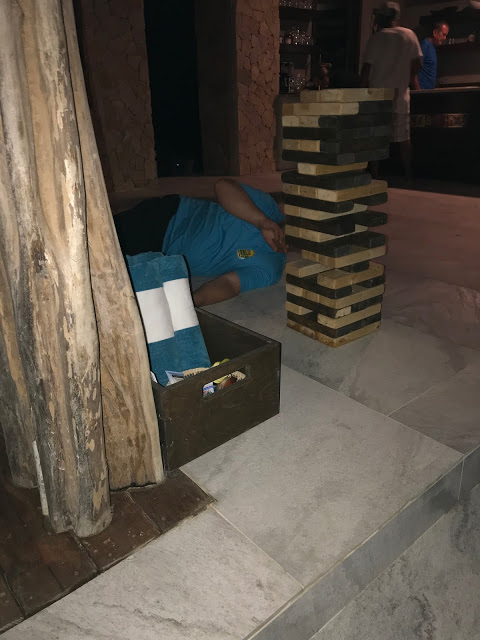 We had so much fun and we can’t wait to go back.

The ONLY thing that I didn’t love was ALL the litter that washed up to the island. Every.single.day. Kelly and I did have fun collecting all the different shoes/flip flops. (There was a dedicated staff member who cleaned up every morning though) BUT, the styrofoam was just endless and not fun to see. Ughhh….stop using styrofoam people. IT never goes away.

The water was SO crystal clear I could hardly Belize My eyes.

Have any of you ever been to Belize? Going there we thought we’d have to use some of our terribly broken Spanish….turns out everyone there speaks English as Belize used to be a British Colony. Who knew?