Oh boy did the Coach and I have some good feels this weekend.

About a month ago it was brought to our attention that  there were quite a few families in a rather poor community East of us that were really struggling; this is a farming town with lots of families that work as ‘pickers’.
This area has always been known as the ‘poor’ area; but they were even more devastated after hurricane Irma. We were told that the kids were wearing clothes to school that clearly were not meant for them, shoes that were way to large to be for them.
One of Coach’s softball players lives in this area and she was telling him about how some families were down to having so little.
The Coach was touched by this and asked her if she could get us some family names and wants/needs lists from these families.
Well, it took her a few weeks, but she (along with her Mom and some school teachers) came up with 15 families that really needed help.

We got the lists and started asking good friends to help us with this endeavor. We sent 5 family lists to  our peeps on the East coast in Jupiter. The Coach and I took on 6 families and I shared the rest with some local friends/family.

Most people asked for clothes, cleaning supplies, personal supplies. (deodorant/soap/shampoo)
Some asked for beds, as a lot of them sleep on the floor. We were lucky enough to have several beds donated; but not enough. Some got beds, all got sleeping bags and pillows though.

It was a huge undertaking that took weeks to get together before we could all meet one morning in their neighborhood to distribute. Coach skipped practice that morning and most of his girls with parents showed up to help distribute everything. It was what I call organized chaos. We had about 30 volunteers to help get everything moving.

From 8am to 10:30 two truck loads were given away to deserving people.
Most of the children could not contain their joy to receive new clothes, shoes and things as simple as a basketball or doll.

No pics of the families as I didn’t want to put them out there on the web.

A few pics of us loading one truck the night before in our garage.

We labeled all the items by family name; some had larger piles than others depending on how many kiddos they had. 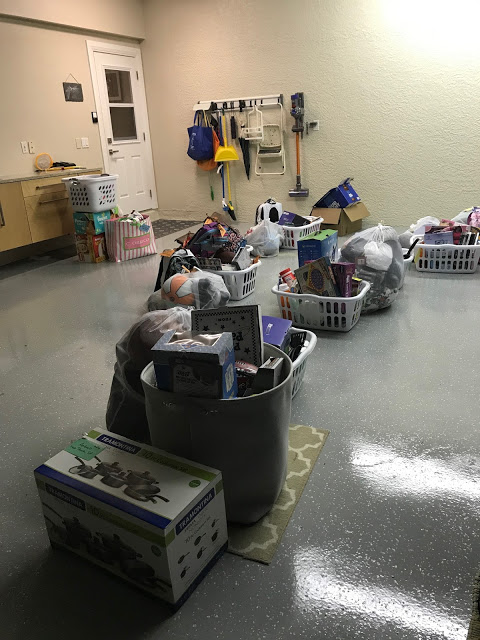 I was shocked we were able to get so much in one truck. There was another truck that was full of furniture.

The Coach and I, along with our friends were so pleased at how this all turned out.

For it is in giving that we receive.
-Francis of Assisi

7 thoughts on “Giving to others is the best feeling ever felt.”