Well, it happened.
It’s December once again. *Pats self on back for making it another year*

We had a lovely Thanksgiving. All the usual suspects were in attendance with the addition to a few new people who were ‘orphaned’ for the holiday. There’s nothing I like more than feeding orphans.

My Aunt, Uncle and Cuz Patrick drove down from ATL for a few days; it’s always a treat to spend time with them.

Aunt Trisha and Uncle Jim (or AT and UJ as we call them) will celebrate their 50th wedding anniversary this month. WHAT A LOVELY UNION!!!

After dinner these three baristas were in the coffee area whipping up some frapaCappaChino something or other…..

Sometimes I get so excited to see my kids I just want to Nom nom nom on them….. 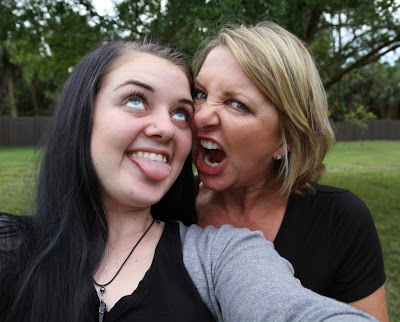 Thanksgiving morning Lolo strolled in at 5:30 from her shift the night before. She showered, went to sleep and woke up at 1:15 for our 2pm meal. She then got dressed again and left at 4:15 for her next shift. We were so happy to have even a few hours with her on Thanksgiving.

We had about 12 minutes in between our meal and her leaving to take a family pic for the Christmas card. Is it perfect and up to my standards? No, but I’m lowering my standards these days. Having all four of us together at once is a feat in itself.

Growing up, I could never imagine having the Popo at our house on a holiday and someone NOT going to jail. I’ve come full circle. 🙂

The Coach got some baby time…. Gosh do babies love him.

I wish I could update the blog more, but I’ve been a busy bee with some charity work and fundraising….plus we have 2 parties that we’re hosting this month. December is upon us and I’m rolling with it as best I can. I’ve got almost all the decorations up and I might shop for my people at some point…..
I hope everyone had a blessed Thanksgiving.

4 thoughts on “The Thanks and The Giving”

Animals As blogged by Suz A to Z Mondays Blonde moments Butterflies Confessions Costa Rica Doing good Family Friends Funny Gardening Georgia Grandma Health Holidays Home stuff In the kitchen Kids Marriage Memory lane Monarchs Music My mom Bev Neurotic. Me? New Zealand On Blogging Pan-freaking-demic Quotes Random Renovation Save the planet Say what? Stuff that keeps me up at night Suz as a kid Swallowtails Tagged and I'm it. TGIF Things I have learned This that and the other thing Travel Vlog Willy Nilly Wordless Wednesday