A while ago we found that she had a few cysts, lumps/bumps, tumors.
This is what Boxers do; they grow things on their bodies….it’s their Jam.

The Doc took a sample from one and decided it must be removed because it appeared that it could be cancerous.

The Coach drops her off early on a Monday morning and he picks her up later that day.
I like for him to drop her off therefore she’s mad at him and I’m not on her sh*t list.

The Doc sent her home with some pain meds and instructions.

That girl was groggy.
Anesthesia will do that to you.

On her list of instructions, it said that if she tries to lick/clean the area, to put a cone of shame on her to protect the sutures.

No biggie. We have a cone in our arsenal because of all the things Ozzie had to endure back in the day.

But, ya’ll she was not messing with her sutures.

Thursday morning it looked like the scene of a crime.

I took her to the vet and they cleaned her up, restitched her and added in some staples.

We dusted off the cone and put it on her as if she was the star of her very own freak show.

All is well. Back on track. 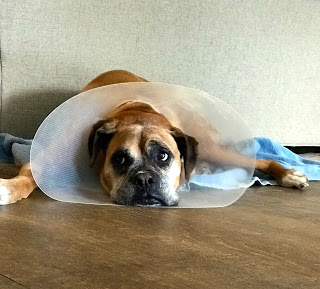 ON Friday night around 10:15 PM, Cocoa remembered that she was a contortionist in her past life who could bend her body in half and get her mouth around the cone of shame to the stitches/staples at the very back of her back leg.

Another bloody mess with her wound wide open. I now have CSI on speed dial.

At one point, we put a Led Zepplin T-shirt on her to try and keep the blood from being deposited all over the house.

Coach took her to the vet as soon as they opened at 7:30 on Saturday morning as we were supposed to leave for Miami at 9am for my Uncles memorial service.

Sadly, the vet didn’t arrive until 9. So, Coach and I left and Lolo had to stay back and get her back and forth for another round of stitches/staples and a MUCH BIGGER CONE. 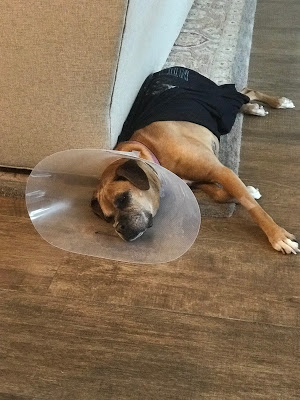 The bigger cone seems to do the trick as she can’t get to the wounds OR even see where she is headed.
I needed shin guards.
The bruises ya’ll.

Fast forward another week while I’m merrily enjoying myself on my surprise weekend away with my girlfriends.

The Coach texts me on Sunday morning that he’s gonna let her have some time without the cone; she’s been leaving it alone and it seems to be healing.

I warned him that she’s only 8 days post-op and she can’t be trusted.
He assured me that he’d keep an eye on her.

But ya’ll. He’s a busy man with lots of projects going on.
He walked away from the family room where she was sleeping with no cone and 10 minutes later….
yep….

Now it’s a Sunday morning, so he had to take her to the Emergency vet who also happens to be a specialty vet office. (I’ve had both Ozzie and Cocoa there in the past)

The emergency Doc said she needs the wound to be re-opened (larger now) and to be restitched and much tighter now.
The Coach feels the Doc is confident in her skills even though she appears to be 25 years old.

The emergency Doc did a much better job than our regular vet; much tighter.
So much tighter that they insisted she be crated or (almost) sedated for 2 weeks so she can’t over-stretch the leg and rip open the stitches. Sadly, with a cone this large, she can’t really fit in the crate.

It’s been a rough road. She’s kinda groggy most of the time from the meds, but still seems to have moments where she wants to play/box. 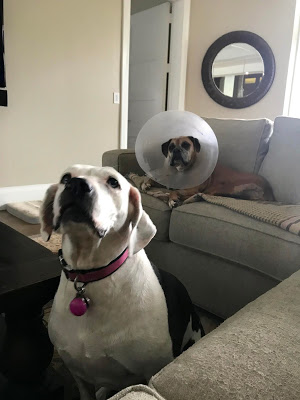 Every day I keep giving her the countdown till she gets the cone off and the stitches out.
As of this morning, she has 4 more days.

I think I’ll be as happy to have it over with as she will come Sunday morning.