Skip to content
We had a great Thanksgiving week. So great, that I never even ONCE threatened to shank anyone.
My aunt, uncle, and cuz Patrick came down from wayyyyyy up north. You know, north Atlanta.
I always love having time with my family. We’re a rarity nowadays with so many gone.

Lolo and Linds are both always so busy with work so I planned on Monday night for all of us to go to a painting party. AT, UJ and Patrick had never been.
*Well, wouldn’t you know that our sweet Cocoa became very sick that afternoon and I ended up at the emergency hospital with her. Apparently, she didn’t want me to paint.
But, my people had a nice time and that made me happy.
You know what else makes me happy? People cooking while I watch. 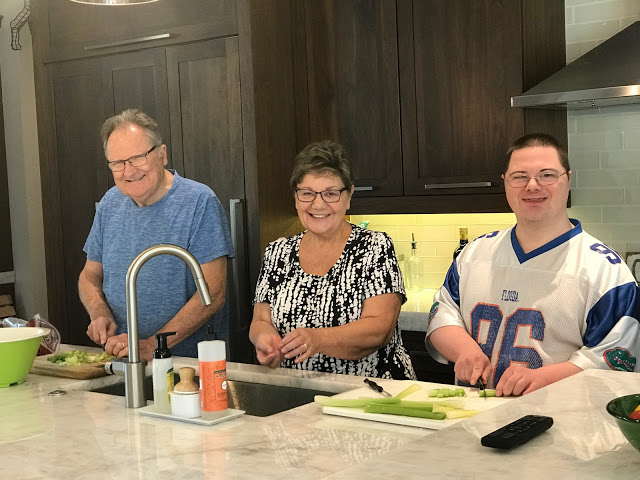 The Coach disassembling my turkey and his dad’s ham.

We had an early dinner because Lindsay had to work that night.
Lolo had to work the night before and Thanksgiving night, so we didn’t see her on Thursday; our very first time not having both kids at the table. I guess that means I don’t need a kids table anymore?
Wahhhhhh….

Since the girls were little, this Naked Kelly doll has shown up in some weird places…..She’s always been naked, but now she only has one shoe. This girl is living some sort of wild life and I hope my pilgrims don’t take after her lead.

On Friday Lolo came over as did Linds and we had some family time. The kids ate some leftovers, called it Thanksgiving, then we went to the marina for a nice dinner. But first, Christmas pictures.

We had a great week and now we’re moving onto the next holiday hoopla.

*Cocoa had a bad case of pancreatitis and stayed in the hospital for two nights. During an ultrasound, they found she had some tumors near her pancreas. We’re not doing any more digging. It’s a wait-and- see kind of thing. Right now, she’s eating, drinking and seems pain-free. Hopefully, that will last a little while.
XOXO

6 thoughts on “Thankful, thankful and not so shank-ful”