Before another day goes by, if you’ve not seen a comment from me in a while, it’s because of your blog settings. In other words, it’s you, not me.

We ended up having 50 guests this year at our annual cocktail party. (I think this marks the 20th year?) It went from 40 to 50 within a day; apparently, it was ‘bring your adult child to our party’ year. Most said it was to have a designated driver, so what could I say. I like for people to enjoy themselves and I’m against driving under the influence. Unless your under the influence of listening to Duran Duran because that is some good stuff.

We opted to have a photo booth this year which really isn’t a ‘booth’ but it’s a standing camera/light that we put in front of a black curtain. I already had lots of Santa hats in my arsenal, so that was fun.

{the Coach with a few of his ‘softball Moms’. They do love him} 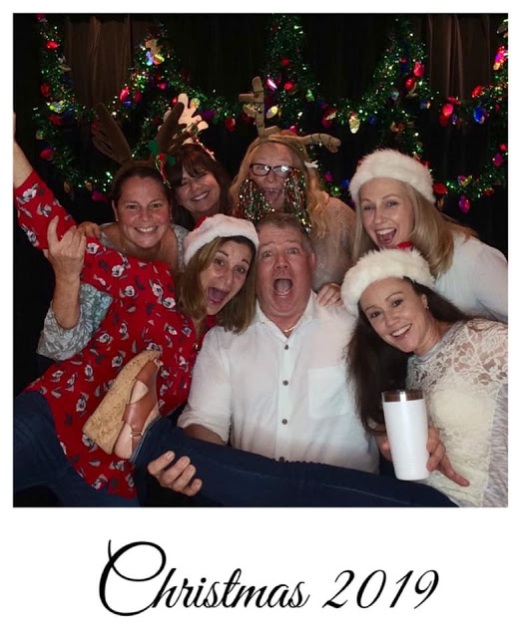 Our surprise musical guest was Ben Allen, of the Ben Allen band. They are locally famous in SWFL. Ben just opened up for Lady Antebellum and Darius Rucker the weekend before and we’ve had him perform at our Songwriters for Vets too. He’s a great guy who is in great demand in our community. Our guests were thrilled to have a one on one with him at our house.
Ben with the softball moms. Those moms really get around….

Back in the day when we had parties, I was inundated with hostess gifts; mostly wine & booze. I enjoy the wine, but it really became too much. So a few years ago I asked peeps to forgo the gifts and bring an unwrapped toy that we donated. The following year I asked people to bring in toiletries for the homeless and boy did they ever! I couldn’t believe the amount that people brought; turns out, people really do like to give.
This year, we changed it up a bit more. {the backside of our invite, I was holding it weird, it was printed beautifully in real life.  I still mail invites!}

A while ago the Coach had these walnut drawer’s that the shop was going to throw out because they were made the incorrect size. He thought they’d make great boxes for our upcoming party giveaways. On the day of the party, he drilled holes in the sides and pulled rope through for handles, then he went to wally world and purchased random snacks/candies. We threw in shredding & some extra bottles of Crowne Royal we were trying to unload and then let our guests drop in bottles as they entered. Everyone brought at least one bottle, some brought two.

In the chaos of the night, I didn’t get a pic of the finished boxes, but I stole a pic from a winner from her FB page.

This was such a big hit; we had 6 winners in total. (the sixth gift was an eco-shelling-dolphin boating tour that a friend donated)
Ya’ll we raised $1340 in a few hours.
I’ll split it between the two charities. We will continue this tradition as everyone said it was the most fun party ever!!
It was such a rewarding and exhausting day. We had people show up at 5:30 and the last peeps left at 1:20am.
It was all smooth with my caterers until we realized the bartender was quite impaired. I thought he was weird upon arrival, but brushed it off that he was quite eccentric. It took about 20 minutes and him cutting his hand trying to open a bottle of Tito’s incorrectly {it’s a twist cap!} to realize he was messed up. Luckily we have first responders as friends; (we had 3 on hand!) our friend T.W took him out of the party area to a bedroom and cleaned him up. He was bleeding quite a bit but didn’t need stitches. The caterer was beside himself, sent another bartender over within the blink of an eye and came here himself to oversee the rest of the night.
The next day, I really didn’t get much done. I was DONE after two weekends of hosting parties. But I couldn’t rest too long because we were then hosting Christmas Eve. The fun never ends!!