We had a very busy and awesome weekend. I hugged, loved and was dazzled by around 185 guests at the Night To Shine event on Friday night. (this was my 3rd year volunteering) I, along with some good friends greeted each guest and got them into Limo’s for a ride around the church parking lot, then to the event center where they were greeted like royalty on the red carpet.
I ended the night with what I would call a stress headache; maybe I was a bit overwhelmed with all the excitement, the hoopla, the cheerleaders bouncing around, the noise from the happy guests….or maybe I’m just getting old?
When I woke up on Saturday the headache was still there and I was exhausted. I made a comment to the coach that maybe I’m on the spectrum because it just seemed to be too much for me this year. (There are a LOT of guests on the spectrum, and I do believe they were in better shape than me. And no, I’m not poking fun at people with disabilities, you know better.)

Sunday night I started coughing and whipped up some hot tea.
Monday morning I awoke feeling like the dead.
Achy body. Chills. coughing. my joints were on fire.
Ugghhh.
I knew it was the flu because I have that fake doctor’s degree.
I spent the day in bed.
Finally, at around 4:00 on Monday afternoon, I remembered that there was an antiviral that you could take to ward off the effects.
I call our Doctor’s office and left a voicemail. (they haven’t answered the phone in 5 years-very annoying)
On Tuesday morning I was anxiously awaiting their call as the Coach was leaving for Miami for the day; I’d been hoping he could just pick up the RX for me.
They didn’t call back until noon and told me that they no longer take our insurance anymore and I’d have to come in and be seen in person and pay. ;(
Eff it.
My window was closing in because you’re supposed to take the antiviral 48 hours or sooner once you know it’s the flu.
“I’ll just suffer through, I’m a big girl”
Well, Tuesday night the ‘razor blades’ in my throat coughing was endless all night. If only I could get the cough to settle down, then I won’t feel like throwing myself off a bridge.
Heck, I don’t even know where a bridge is in my town.
Wednesday I crawled into the walk-in clinic and waiting over an hour to be seen.
They did the Flu test and guess what? I got 100%!

The kind Doctor told me that I was too late for the antiviral and to take Mucinex DM and Tylenol.
I really should have been a Doctor.

I asked him if I had got the flu vaccine if I could have avoided this and he shrugged his shoulders and said: maybe, maybe not. You never know.
The one time I had the vaccine, I was extremely sick with the flu and I vowed to never do it again.

I still feel like hell, but I know I’m gonna live.

In the middle of all this, Callie has been having issues and I had to take her to the Vet (with the flu, but I wasn’t officially diagnosed. The coach was out of town and it was up to me)
She’s back at the vet again today for testing and I could not be a veterinarian, because I have no idea what is going on with her. 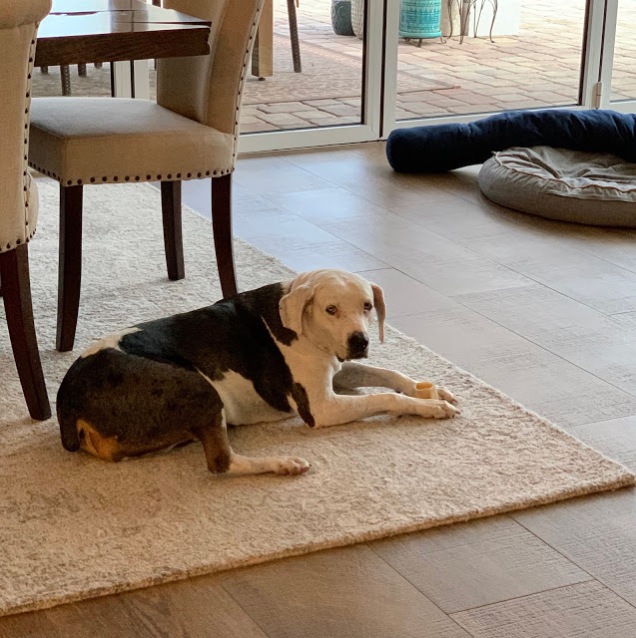 The Vet did ask the Coach when he dropped her off this time if she had got into any ‘edibles’ in our house. (we don’t, but that doesn’t stop her from looking like she’s had some edibles)
Good lord, if I had those, I probably wouldn’t care about having the flu.
Say a good word for our Cow dog if you can.

Also, an unseen (until the day I had the flu) water leak into one of the bedrooms…..I found wet carpet and a moldy (behind the dresser) wall. That’s probably good for the ole’ respiratory system.
Waiting on the plumber now. I’ll keep my distance from him, but I need that fixed asap.

If Suz, her Callie, and her house could just calm the eff down, that would be great.