I spent so much time on my back over the past week, you’d have thought I was getting paid.
*Straining my neck to see if I have bed sores.*

I started watching the series Outlander while home with the flu. I’d read the first book years ago, then forgot about the whole thing. WOW. (the first season has 16 episodes-unheard of!)
I know it’s far fetched and not exactly great fiction, but WOW.
One morning, I awoke to an email from Netflix reminding me that the next episode of Outlander was available….don’t they know I haven’t stopped thinking about that since I went to sleep yesterday?
SO much violence, sex, and sex-violence, I can really only handle a few episodes at a time in my delicate state of mind. *giggle*

I still sound like I’ve got a pack and a half of Marlboro red a-day habit. That’s attractive.
I still have moments where I feel like crapola. And a few moments where I feel ok. I’ve still not got back to the gym for fear of a coughing fit and plus, low energy.
Next year, (or is that this year?) I’ll be the first in line for the flu shot.

My Aunt texted me the other day asking if I was feeling any better and stating that it was a good thing I got the flu prior to our upcoming trip to CA.
Me: Yes, I’m getting better. And yes, luckily for me, this was the best time to get the flu; aside from Callie being sick too, I didn’t have anything pressing this week.
She applauded me for having a good attitude. I do like to be applauded even if it’s via text.

The Callie saga. I didn’t go into details before because her symptoms were all over the place and they made no sense. If you are a dog person and care to see what the deal was read the next long part of this post. If you don’t have a dog and have no need to know, skip this part.
*On Saturday night I’d noticed that she was drinking a lot of water. I caught her standing over her bowl and then just staring at the wall. I had flashbacks of Ozzie; he did this often and then we learned he had a brain tumor and staring at walls was an indication of brain issues. (headaches)
She was fine the next day and I didn’t give it another thought.

*Tuesday, the day that my Flu was in full force, Callie amped up her weirdness for me. She didn’t eat breakfast. (eating is her favorite thing) She was drinking copious amounts of water. Then I noticed she was shivering/shaking. I was concerned. The Coach was in Miami but would be back later that night and I assumed he could take her to the emergency vet to see what was going on. But then I noticed that while laying on the tile floor, she had urine leaking out of her; almost faucet like. I called my vet and they were able to get me into their sister location that afternoon. Nothing like being very sick and having to pick up a sick 68lb dog and putting her into the back of my SUV.

*We were at the vet for almost 2 hours. The Dr. ran blood tests even though she had bloodwork done the week prior for her Rymidyl RX refill. (a common Arthritis anti-inflammatory) The bloodwork today is coming out totally different than last week and the DR. is very confused. Her blood sugar is scarily low and he can’t figure out how she is still LIVING with her blood sugar so low. He tested her urine and was shocked at how ‘watered’ down it was.

*The Vet wanted to run some glucose type tests the next day and asked us to please get her to eat that night. She needs to raise her sugar levels or else.

*Wednesday she was able to eat breakfast but had been leaking watered down urine all over the house all night. I had towels on top of every one of her beds and kept swapping them out.And I awoke twice in the middle of the night and took her out.  Coach dropped her off for the new tests in the morning and would pick her back up later in the day. When he picked her up, she seemed ok. They left the iv/catheter in her leg (first I typed arm, she doesn’t have an arm) in case we had an emergency during the night. They said her sugar levels were even worse today and that was after eating breakfast. They did an ultrasound but didn’t see anything ‘alarming’ on her kidneys or in her belly. They instructed us to bring her back the next day to check sugar again and remove the iv/catheter. We started giving her some Prednisone (steroid).

*Thursday the Coach took her for sugar testing and removing of IV. Her sugar reading was still bad; 70. But better than the 41 it was on Wednesday. The Dr. is throwing out some ideas of what she might have gotten into.
1) Did she get into any medicinal marijuana? Ummm NO.
2) Any chance she ate some sugarfree gum that has xylitol in it? This is lethal to dogs. I’m a big fan of sugarfree gum, but I don’t leave it lying around and I haven’t had gum in the six weeks since I got my Invisalign. Also, Callie isn’t the dog who gets into stuff; she never has been.

*Friday, her cortisol tests came back normal. Still waiting to hear how her insulin levels were that they tested on Wednesday. We’re both wondering if the Dr. knows what he’s doing as it’s taking forever for us to get an answer. The urine leaking is slowing down, she’s eating better and we’re basically feeding her small amounts all day long to keep sugar levels up. Just a few weeks ago, I was chastised about her weight and told to cut her food down….now, it’s anything goes.

*Saturday, the Coach woke up to several small piles of bile/vomit around the house. Suz was in a flu coma and heard nothing. Callie finally had an appetite later in the day and seemed ok.

*Sunday, she acted normal. No pee leaks. No vomit. YAY!

*Monday-we finally got a call from the Vet at 7:30pm. He has a diagnosis and it was something he mentioned in passing earlier last week. They did see something on the ultrasound on her pancreas; a small node of sorts and they think what she has is an Insulinoma. “An insulinoma is a malignant pancreatic tumor that inappropriately secretes excessive insulin, resulting in profound hypoglycemia.”
So. having an answer is so much better than the unknown. He was happy to know that she was now eating and not leaking as much urine. We will continue on this path until she isn’t happy anymore. He realistically said she could have another 2 weeks or another 6 months. And at 13, we’re not going to do anything invasive whatsoever.

We have several trips planned, so I’ll be losing sleep worrying about the ‘what ifs’ while we’re away.

On a funny side-note; when Callie was at the vet’s office most of Wednesday, they noted to the Coach that she ‘looks so sad’ so she must not feel well. 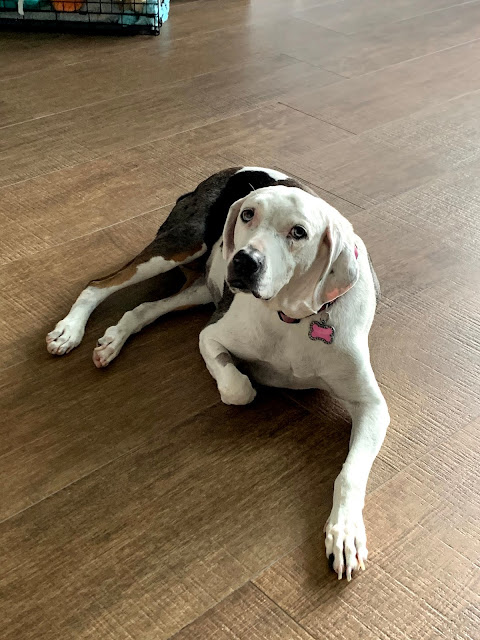 Ummm actually, that is JUST HER FACE. She always looks like that. You’ve heard of resting bitch face? Callie has ‘resting sad face’.  My poor sweet cow dog.
She’s hasn’t had the most ideal life, but since living with us the past 4 1/2 years, it’s been all gravy.

I promise I have good things to write about. I feel like Debbie downer lately on the blog, but hopefully, I’ll be shooting sunshine and rainbows out of my butt (ouch) again soon.