Last week Lolo was pepper sprayed on Monday morning, then she was tasered on Wednesday.
How could someone do that to this cute little face?

If you didn’t know that she was currently enrolled in the Deputy Sherriff’s training program this would be an odd thing to share.
Well, that up there is not her current face….and she hardly climbs into chimneys anymore; but it’s still the face I think of when the thought of her being hurt arises.
I practically had the child wrapped in bubble wrap from ages 1-12; and this is what she does?

{FYI: She said she’d take the taser about a bajillion times over one pepper spray in the eyes.}

***
Since the weather has been nicer, I’ve been walking with a good friend several days a week. She’s the same height as I am (short!) but she walks faster than I do. Honestly, I consider myself a VERY fast walker. But, my fast walking friend is wearing me out.
I finally figured out how to slow her down. We pick up garbage while we’re walking. She thinks we’re doing it to save the planet, and we are, but we’re also saving my legs/feet so that I can function the rest of the day.
We’re getting in about 3-4 miles miles each walk.
***
Right now the Coach and I are eating gobs of fresh romaine and arugula from the garden.
Don’t hate; appreciate. But soon we’ll also be eating gobs of fresh ‘maters!
Ok, now you can hate. 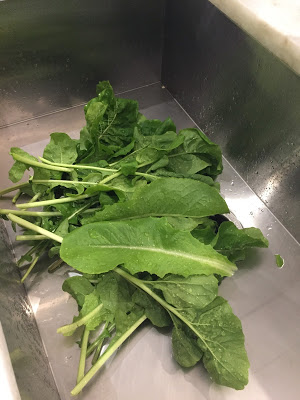 Basketball season is upon us. We’re big boosters of our local college and we love attending the basketball games. Our ladies team and the men’s team are awesome! We had two games this week. The Coach doesn’t do anything small or understated. Hot dogs? Burgers? Nah…….how about delicious food served in adorable little thingy-ma-bobs. And wine. Always good wine.

***
I’m very excited about Thanksgiving! Actually, I might be overexcited and you know what happens then….
My Georgia people will arrive early next week; I’m ready to start the festivities!
I’ll have an actual kitchen to cook in instead of the laundry room/office/craft room that I had last year.

Have I told you today how much I love my kitchen? I do. I REALLY DO!

Is everyone excited about Thanksgiving? Did you locate your stretchy pants yet?

Have a bee-u-Tiful weekend. XOXO

Linking with Tanya and friends for Willy Nilly Friday.

Happy Veterans day to all our wonderful vets out there; many thanks for your selflessness!

This past weekend while the Coach was away coaching, I ended up watching two Hallmark Christmas Movies.
TWO.
After all that sweet sappiness, I needed a good cleansing.
One episode of The Walking Dead did that.
I’m back to my regular self now.

One of my favorite sweet treats lately is smeared peanut butter on a banana.
And not just any regular ole Jiff or Peter Pan.
The Coach and I think this freshly ground peanut butter from the Publix deli is the bomb.com.
I love it so much I’m thinking of committing bigomy and marrying it.

Everyone’s all “Trump this, Hilary that” and I’m over here ooing and ahhhing over butterflies!
I had FOUR monarchs emerge one morning. I’ve had 7 total (as of Thursday) this week and they’re all females. Seriously…..how are they even being conceived? I’m so confused.

I frequently spot Queen butterflies in my garden too; they’re also fans of the milkweed. At first glance they could be mistaken for the monarch.

Anyhoo…..I’ve also found several Queen caterpillars amongst my monarch caterpillars this week. See, we can ALL get along just fine!

{{I noticed that my thumb nail looks so pretty up there. Don’t let that deceive you, the rest of my digits appear that I’ve spread several bags of mulch, dug some holes for drainage and played with rocks in the garden this week.}}

Meanwhile, back in the big ole oak tree that houses a lot of my orchids, theres a mess of color happening. And a token sun-worshiping dog. 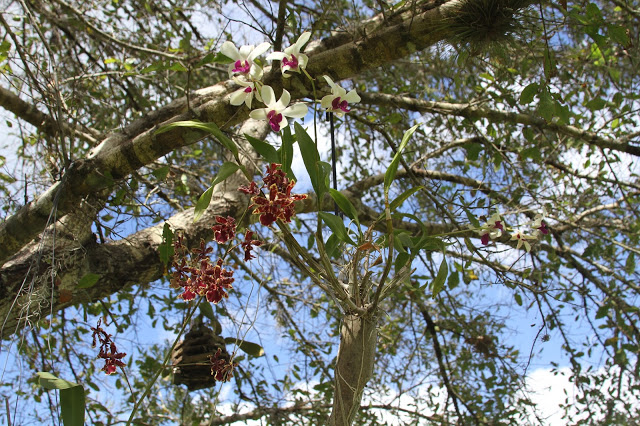 Wishing everyone a stress-free weekend full of color, pretties and maybe a hallmark feel good movie? Just don’t go overboard like I did.

A while ago I’d read about Mason bees and what a great contributor they were for pollinating. They don’t make honey or sting you….they just pollinate, pollinate and then pollinate some more.
I’d purchased a mason bee house and we were going to hang it….but then life happened. It’s still sitting on the outdoor kitchen waiting. But seriously, I’m not in short supply of bees in my yard…..they are a plenty.
(Also, I’ve got a lot of the a**hole kind; the wasps, the hornets, the angry yellow jackets!)

Anyhoo….in one of my newer butterfly (milkweed) gardens I’ve noticed these weird looking BLUE/GREEN bees.
Me: “what are you and why are you always here?”
The Bee: “buzz, buzz, buzz”
I finally googled this because I was then worried they might be the carpenter Bee that my Aunt and Uncle had issues with this year. 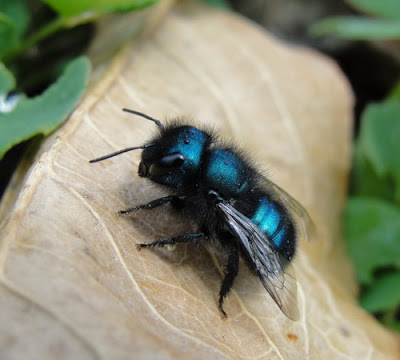 Alas, this was NOT an issue.
The Blue Bee is a GREAT bee to have.
Actually, I’d hit the BEE lottery.
They are Blue Orchard Mason Bees. They pollinate, pollinate and then pollinate some more.
And, they’re lovely.

TV
Has anyone been enjoying some of the new shows this season?
I’m particularly fond of This Is US (reminds me somewhat of Parenthood, but a bit deeper)
It’s thought provoking and touching.

Also, American Housewife. This mama cracks me UP as does the Dad on the show. Great writing. 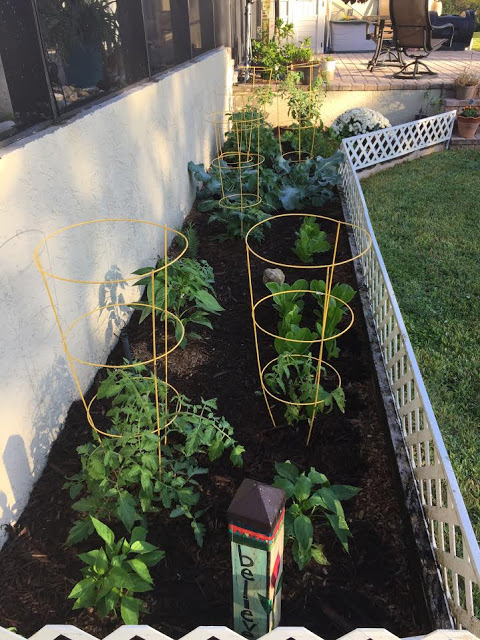 I finished my veggie garden a few weeks ago and it’s coming in nicely. My MIL gave me a beautiful Mum, some tomatoes and arugula. I then added more ‘maters, red and yellow bell peppers, romaine and broccoli. This is the first time I’ve ever mulched my veg. garden and I’m hoping this alleviates all the cussing that I do because of the weeds.
Yay for less bad language.

Rebellious caterpillar
I currently have 10 chrysalis in my ongoing saving of the monarch butterflies.
Can you see this one in the pic? He/She is on the OUTSIDE of the container. When it was a caterpillar, it escaped a few times from the container. Seriously, I’d never have this happen before. So, the last time it escaped, I just left it outside…..I’m going to have a good ‘talking’ to this one in a few days when it’s ready to fly. Rebel.

Christmas
It’s only the beginning of November and I’ve already planned two Christmas parties.
I’m excited.
And whooped.
But mostly excited.
Last year we weren’t really able to decorate for Christmas since we were living in half the house, I’m sooooo ready to put up the Christmas tree(s)!!

Are two tree’s enough this year? Gosh….I’m thinking I might need three.
Just kidding.
But really….three is a better number when it comes to design.

Have a great weekend!! I hope you’re buzzzing with fun.

Animals As blogged by Suz A to Z Mondays Blonde moments Butterflies Confessions Costa Rica decorating decorating with Suz Do I need a shrink? Doing good Family Friends Funny Gardening Georgia Grandma Health Holidays Home stuff In the kitchen Marriage Memory lane Monarchs Music My Delightful Offspring My mom Bev Neurotic. Me? New Zealand On Blogging Pan-freaking-demic Quotes Random Renovation Save the planet Say what? shopping Stuff that keeps me up at night Suz as a kid Swallowtails Tagged and I'm it. TGIF The Wedding Things I have learned This that and the other thing Travel Vlog Willy Nilly Wordless Wednesday