is for Atom Ant.

Not to be confused with Adam Ant. Oh, that Adam…he was my very first live concert..the Fox Theater in Atlanta.

I was all of 14….I declared I would give birth to 6 of his babies and travel across all of Britain on tour.

By 17, I decided I liked men without eyeliner. And with a green card.

Today, I am talking about THIS Atom Ant:

Do you remember him?

He had his own 30 minute cartoon show, produced by Hanna Barbara.

Apparently I caught the re-runs…unless my Mom had a TV in my crib, cause I was born in 1967. But then again, “baby proofing” your home is different now than in the 60’s.

I did love this show..he was an Ant, but he had some super duper powers.

Which was cool to me..since I was the size of an ANT until I was about 23.

I had forgotten all about Atom Ant..

(But, I will never forget my unrequited love with Adam Ant)

…UNTIL, I was going through some old family photos..the ones BEFORE our digital camera.

I was scanning in some old pics and came across this one of my lil’ Linds.

The girls received bikes from Santa. 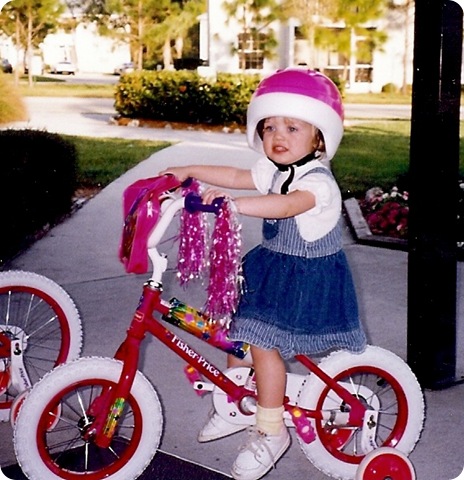 And Linds received a sign that she was related to ATOM ANT.

To see how others used the letter A visit: Jen at Unglazed

THANKS Jen for hosting a-z Mondays for the last 52 weeks. It has been FUN!!!

So, Coach and I were not to exchange gifts for Christmas. But he is a bad boy…he broke the rules. Quite the rebel…. with a cause.

Some of you tried to guess on the B gift…

Not even a Buick, Botox or a bikini wax. ouch to the last two.

For Christmas, he gave me this sweet Bee necklace:

I was surprised. Pleasantly surprised. I was mad too, but I got over it quickly. Jewelry does that to girls.  I had jokingly mentioned in the blog a while ago about a Tiffany Bee necklace. Well what did he do, but look for that one. Luckily for our bank account, it was no longer available and he found this little cutie patootie instead. I LOVES it.

I shall name her Beatrice B.  She is my bestie.

And that is not the only Bee I got for Christmas.

Lo made this sweet Bee bracelet for me.

I love it as well. Nothing like throwing on a pearl bracelet to class up my jeans and flip flops!! (my daily wardrobe) Her talents never cease to amaze me!

And Linds made this custom tissue box for me.

Yeah, she is awesome.

See the inspirational saying on the top?

“Got an issue? Get a tissue!” She hears that a lot around here.

Remember last year when she made me my own personalized Shank? I am one lucky Mom.

I have been Blessed with a wonderful family. Gosh…just pinch me!!  Ouch, not so hard…I am as fragile as a butterfly!

I hope everyone had a wonderful Christmas as well and hopefully you did not end up with a houseful of bees…unless that is what you wanted?!?

To see how others used the letter B today, visit: A-Z Mondays

I should be writing about my fantastic trip to Costa Rica a few years ago…it was cool!

But today I am thinking of  things I am able to Check off my list.

Christmas cards. They are done.  Yippee!

Does everyone keep their list on an excel spreadsheet? I am a little crazy with my Controlling lists…my good friends know that if they don’t send me a Christmas Card for 2 years in a row…they are off my list. That is naughty. Are you a naughty friend?

My desk is a little cluttered with Christmas Cards…some Christmas confetti and some other Crap! Must Clean it soon.

Our Christmas Cocktail party was a complete success.

My Chocolate fountain was a complete Crock of p00h. I messed up the Chocolate somehow…but I did not CRY!

Coach was a big help…he suggested I not cook so much and instead order some platters of food. It took me 8 minutes to ponder this and then I placed the Call.

Our night of “denial” was full of good food and great friends..and some cocktails! 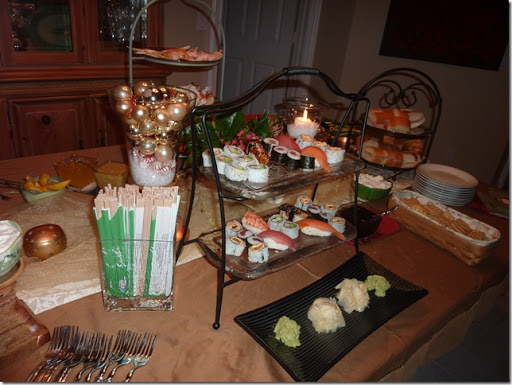 How about some Crab and lobster Claws?

I made a fantastic salad with Champagne dressing…will share later. maybe.

My night would not have been complete without my silly, happy and laughing friend Dawn. She is so cute!!!

My girls were awesome little helpers too. I Could not have done it without them!!